Emojis and Business Emails: Match Made in Heaven or Complete No-Go?

We've all become accustomed to seeing these colourful ideograms in all their various guises popping up in texts, emails, and social media posts - but are they right for business emails? 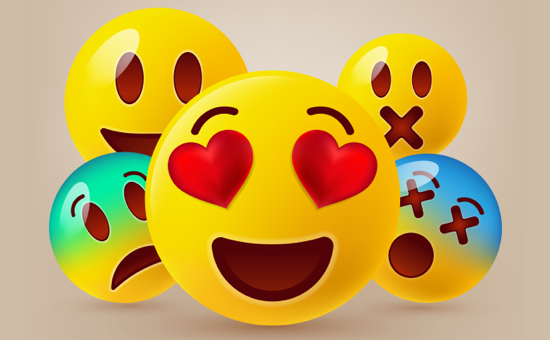 As they have been adopted into the cultural codex of our time, many emojis have come to represent more than they were perhaps initially intended to. Take the 'information desk person' for example, which has been embraced as the unofficial sassy and/or sarcastic emoji, and the 'eggplant/aubergine' which is often used to mean, well, we probably don't need to elaborate too much there.

So, if emojis are now part of our daily social life online, do they also have a place in business emails? You're probably hoping for a yes/no answer but the reality is a bit more complicated.

Can I Use Emojis At Work?

This will of course depend on the culture of your workplace and the interpersonal relationships you have with your colleagues, but you're probably safe throwing a few emojis into your internal communications.

Emojis were originally created in Japan in the late 1990s to liven up text messages and they really can make those slightly dull but very necessary work-related messages more appealing to read and reply to.

Can I Use Emojis in Business Emails?

Well, it depends. Before tapping that emoji keyboard, it's worth asking yourself a few questions.

If you're in healthcare or corporate finance, emojis might not have a place within your workplace. Don't forget their meanings can be very subjective and open to misinterpretation. So, you know, don't risk your career for the sake of an upside down smiley face.

Can My Use of Emojis Make Me Appear Less Competent?

The short answer is: potentially, yes.

A 2017 study conducted by Dr Glikson and published in the Social Psychological and Personality Science journal found that emojis don't always positively affect perceptions of warmth and often decrease perceptions of competence. A separate survey conducted by OfficeTeam found that almost 40 percent of senior managers think it's unprofessional to use emojis in work communications.

Although initially these statistics make the case for complete workplace emoji avoidance, in reality it really does depend who you are communicating with.

If you know your recipient expects to receive traditional correspondence, it's probably not smart to include smatterings of this relatively new form of communication. If, however, you're conversing with someone who likes to keep things on the informal side, dropping in the odd emoji will likely actually enhance your communications and help you to build personal relationships more effectively.

So, although we wouldn't recommend firing off emails comprised solely of emojis, slipping in the odd thumbs up, crystal ball, or cute puppy doesn't mean that you aren't also really good at what you do. And, let's be real, abbreviations and text speak are considerably more irritating (and at times outright confusing) than the occasional smiley face. Just saying.

We're on hand to field any emoji or, indeed, non-emoji related questions so if you've got any queries, give us a call or send us a message. And yes, emojis are always welcome. 😉